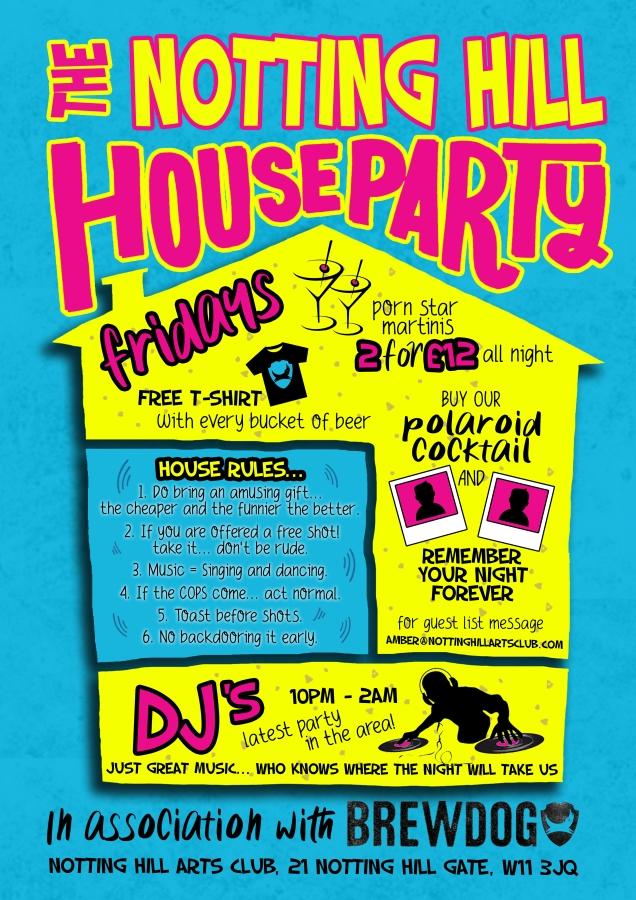 “THE BEST HOUSE PARTY IN NOTTING HILL” – Unknown man on his way out one time.

When the owner of the Notting Hill Arts Club went MIA one Friday night, the staff took over and threw what was known as the best house party in West London. It was the house party to end all house parties and we’re bringing it back EVERY Friday. We’re bringing the tunes and we’ve teamed up with BREWDOG to bring the booze. Expect to hear everything from Mr Brightside to No Scrubs, whatever you want we’ve got, it’s a House party after all.

‘A large party involving many people contained in someone's house where dancing, drinking, and other party staples occur.’

1. Do bring an amusing gift – cheap and funny is better than posh and dull.
2. Do be up for anything.
3. Do go with the flow, and make sure you find the local bigwig neighbours interesting, whether they are or not.
4. Don’t be boring; and don’t get sick.
5. Don’t ask who else will be coming.
6. Don’t break things.
7. You can’t go to bed early – don’t worry, you’ll have plenty of time for an afternoon siesta to ready you to stay up till 2am, dancing to whatever we want to play that night.
8. If you’re offered a free shot, take it. Don’t be rude.
9. No ID no entry